All categories, History of smells in the cinema 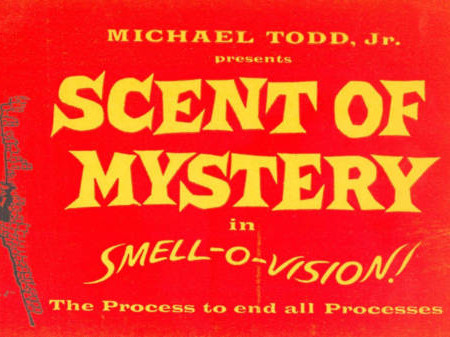 Human beings over the years have become the most successful in replicating the visual and audio experience in all vividness, but when it is about replicating an environment complete with audio, visual and smell, the challenge seems enormous. Is it possible to smell the roses when the on-screen characters moves around a garden? In a different note, is it possible for the movie watcher to smell the humid earth when a farmer ploughs his land in a movie? All such propositions can really sound ridiculous, but they are being worked upon by scientists for years.

Yes, audiovisual reality complete with the smell of the depicted environment is still something innovative efforts are trying hard to bring. Later we’ll deep on the Olorama Smell Generators, but not let’s focus on several old attempts in this direction. This is why it is important to have a gross overview of all the attempts in incorporating smell or scent into audiovisual experience.

The first attempt to incorporate smell in movie theatres actually goes back to 1916 when the well known Family Theater in Forest City of Pennsylvania provided the spectators of a Rose Bowl game experienced the scent of rose oil. But the attempt soon drowned in the surrounding noise.

Hans Laube is regarded as one of the founding figures of smell-o-vision approach to audiovisual-smell experience. There cannot be something more realistic than being able to remember Hollywood stars by the perfume or deodorant they use. By incorporating smell into movie theatres endless possibilities could be opened up for the moviegoers. With this vision Laube came with his invention called Smellovision, a scent emitting system that can release scents from individual movie theatre seats. The system was first brought to the public in the New York World’s Fair in 1939.

After that, there have been no significant progress in improving this technology further. The technology was mired into the collective forgetfulness of the people. Again it rose to prominence with the launch of 1960’s famous film “The Scent of Mystery”, a mistery film produced in Spain. The directors and producers remembered the invention of Hans Laube and encouraged him to improve the technology further to produce something like a “smell brain”. As the movie continues, a whole series of perfumes and scents were released in the theatre to create an environment that realistically smells the same as the actual environment shown in the movie (this is something that Olorama Smell Generators can do today easily but at these days it was really challenging…).

Most important thing about this innovation is that for the first time several clues of the movie were perfectly conveyed through smell brain. For example, when in the movie a killer smokes a pipe filled with Turkish tobacco, the visitors get a smell of it sitting in the theatre seat. All the positive buzz that Smellovision technology received until now gained a solid basis for further research and development after the release of this movie.

At the same time, there were several drawbacks in the experience provided by the Smellovision system. According to the balcony visitors in the theatre one smell took a lot of time to take effect or to take over the preceding one. So, the technology was far from perfect in respect of incorporating smell into audiovisual experience.

During 1965, Smell technologies for a brief period experienced a resurgence. A self proclaimed inventor of a new Smellovision system appeared and BBC interviewed him. The system according to him could produce the smell of an object shown in TV right in the home if the people. By trying to validate his claims he used a lot of materials ranging from brewed coffee or sliced onions or burnt tobacco and made a successful demonstration of emanating the scents through cathode ray tubes right at home environments. Unfortunately, it didn’t gain much attention apart from being considered largely as a fraud.

Though Smell-o-vision remained shelved all these years, the inspiration behind and popularity if the technology really didn’t vanished away. In the year 1982 movie

John Waters came with a slightly different version of the technology when releasing the 1982 movie and introduced “scratch and sniff” feature through Divine vehicle Polyester in “Odorama”.

Soon in the mobile dominated age of gadgets, the old Smellovision technology was presented by Digiscents, Inc. who came with a iSmell Personal Scent Synthesizer. This is the first of it’s kind device that can emit smell transmitted by the web content.

Entire spree of inventions and the attempts to incorporate smell and scent into our audiovisual experience actually prove one thing very clearly: A great idea cannot be undermined and shelved forever. Thanks to Olorama Digital Smell Technology and our Smell Generators you can already incorporate smells into 4D cinematic experiences, Immersive VR, movies, events or Escape Rooms…