The real history of smells in the cinema

Documentary, History of smells in the cinema 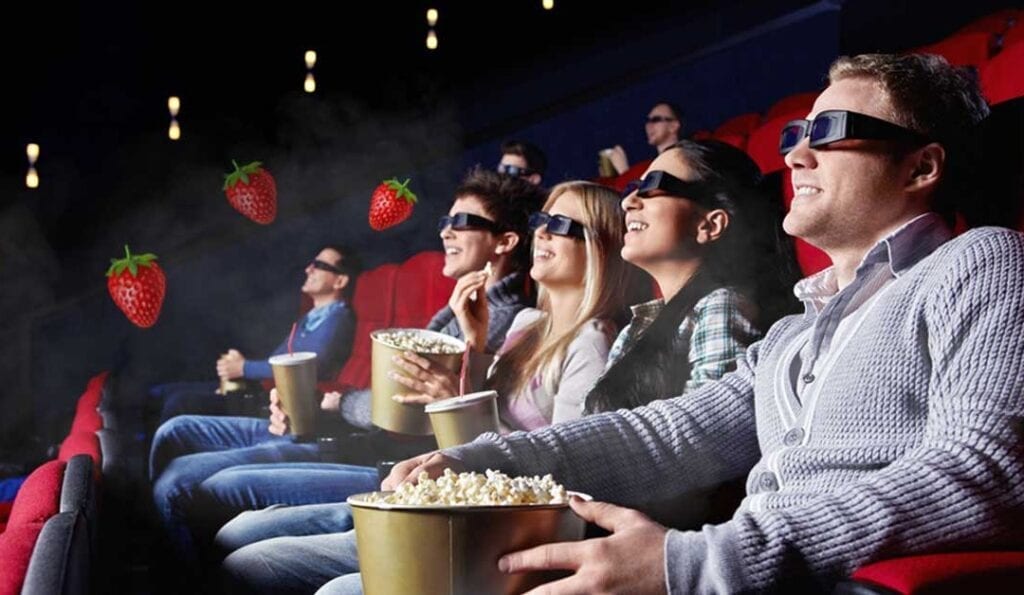 Incorporating the smell in the theaters has been one of the most important challenges in the film industry since the beginning. Long before the sound or the color was introduced, there were a lot of attempts to bring scents to the big screen, that didn’t convince anyone, neither their own creators.

More than 120 years later, an Spanish engineer came out with the solution, he transformed it in an device with the size of a shoe box and named it Olorama Digital Smell Technology. However, coming to this point has involved a series of weird inventions and crazy creations of which we are going to do a little review.

In 1916 at the Family Theater of Forest City (Pensilvania, USA), its owner, the famous Roxy Rothafel, wanted to give an extra of elegance to the screening of a coverage about the Tournament of Roses parade in Pasadena, where dozens of floats full of flowers take part in a huge parade around the city. For that, giant cotton balls impregnated with rose perfume where hang by the ceiling, in front of big fans that spread the fragrance all over the place.

What Roxy did pleased the North-american cinema’s owners and, in 1929, in New York and Boston (USA), several methods to perfume the rooms from the ceiling and through the vents where tested. The chosen movies for those tests were “The Broadway Melodie“ and “Lilac Time”. It was only one fragrance, and the result ended up being just like adding air freshener. After a while of being in the room the sense of smell got used to that scent, and the effect lost relevance.

The first great effort to be able to synchronize the odors with the scenes taking action on the movie came by 1943. In a Detroit cinema there was used a system that, by compressed air, pumped different fragrances into the air conditioning ducts. During “The Sea Hawk“ film, starring Errol Flynn, they were trying to recreate the atmosphere aboard a boat by smells of tar or sea breeze.
Meanwhile in “Boom Town” film, with Clark Gable and Spencer Tracy, each of the characters had its own characteristic odor that identified them: coffee, tobacco, cigarettes,¦

This invention neither had a great acceptance, among other things because the essences stayed too long in the room and some got mixed with others, losing the desired effect and turning into a disturbance.

In 1959, Walter Reade Jr. introduced to the world the AromaRama, a device of his own invention whose novelty was to automatically synchronize the dispersion of odors by the air ducts through a band of sync attached to the film. To avoid the odorsâ mixture, a neutral perfume was used between scenes.
The premiere was a documentary called “Behind the Great Wall“ and once again it was a complete disappointment. The scents were too artificial, they didn´t correspond to reality and they were even annoying for viewers. Time magazine described it:

“When in the scene appears a pine forest, however it smells like underground toilets in a cleanup day”.

The Swiss Hans Laube introduced a system called Scentovision during the 1939 New York’s Universal Exhibition. This system was managed by an operator that, via a keyboard, liberated scents through some tubes located in the seats of the spectators. Filmmaker Michael Todd and his son, known to be the inventors a the panoramic system, were amazed by this device and they associated with the Swiss to improve it and release the first ever film developed to be exhibited with fragrances, “Scent of Mystery“.
The new attempt was called Smell-o-Vision and had the same little success than its predecessors.
Because to install this system in the cinemas was very expensive, and it needed more than 3 kilometers of pipelines. Critics also complained about the disturbing noises that this system made, and it even splattered the spectators a little. One of the New York Times criticisms came to say that:

“it would have been better to throw laughing gas… so at least we would have enjoyed the movie”.

Odorama and the scratching odors (1982)

In 1982 John Waters gave the smells a try again in his film “Polyester”. In this case, when the spectators entered to the cinema, there was distributed a card called Odorama with different boxes where different scents encapsulated in the paper came off with a little scratch. A superimposed signal told the spectators which one of the boxes they should scratch. This technique has been used occasionally in other kid’s movies such as “Rugrats go wild” or “Spy Kids 4DMovie”.

The Sniffman or fragrant necklace.

Already in the 21st Century, the German inventor Stefan Reutz created a device which he called Sniffman, on a clear set of words in reference to Sony Walkmans. It is a device that is placed around the neck and sheds odors when it is activated through radio signals. The system has’t succeeded because its implementation would mean a large outlay for the cinema industry and this device could be uncomfortable for the spectator.

In 2013 the Spanish engineer Raúl Porcar developed Olorama Digital Smell Technology, this is by far the most efficient system to incorporate scents into audiovisual world including Virtual Reality. Basically, it is based on hardware, software and essential oils synchronized via Wi-Fi with the movie player or VR engine. This device is able to disperse into the atmosphere up to 12 different scents. The big difference from Olorama compared to other devices is that the scent lasts exactly the required time and it doesn’t mix up with the next scenes fragrance. This is also a system that is able to be scaled so it can fit in rooms of all sizes, from big theaters to home players.

Voice-activated scents
We use cookies to ensure that we give you the best experience. If you continue to use this site we will assume that you are happy with it.Ok